Your message has been sent.
ATTENTION: You are currently using an unsupported browser. We recommend switching to Google Chrome or Edge for the best on-site experience.
An error has occurred while processing this page. The site administrator has been notified. We apologize for the inconvenience.
Back to catalog 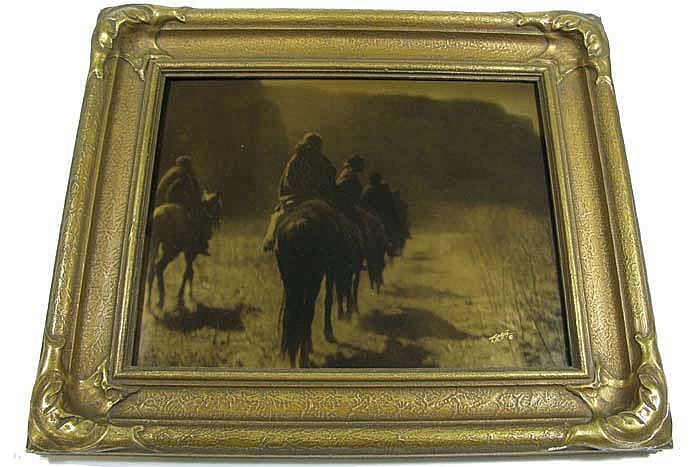 EDWARD S. CURTIS OROTONE (GOLDTONE) PHOTOGRAPH. (Seattle, Washington 1868-1952) Titled "Vanishing Race-Navaho". 14 in. by 11 in., signed in gold l.r. ES Curtis In original "pie crust" brown & gilt toned wood frame with artist's paper label verso stating that "This is the most popular and best known of all the Curtis pictures and is internationally famous. Provenance: by direct descent in the family of Simon Benson, Portland's well known lumber baron, engineer, financier who donated land to the City of Portland including Multnomah Falls as a park and for whom many landmarks in Oregon are named. Purchased as an engagement gift for Nettie Benson, Simon's niece, by descent in the family of Annette Benson Howe Larson.

You agree to pay a buyer's premium of up to [bp]% and any applicable taxes and shipping.